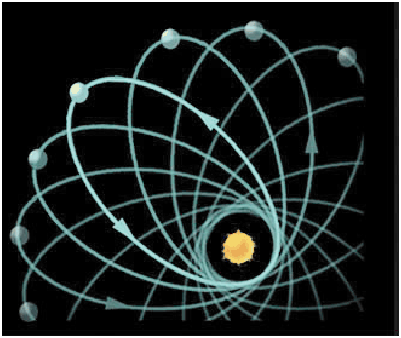 I had to figure out what was wrong with Paul Gerber's derivation. Gerber's work has been dismissed by the Wikipedia people and I couldn't figure out from reading their posting if the problem was in the derivation of the Gravitational Potential Formula or afterwards.

Here I derived the Precession Rate formula starting from mine (and Gerber's) Hypergeometrical Gravitational Potential. I was able to obtain the accepted formula.

Paul Gerber's work has been dismissed because he didn't have a great argument to support his potential. That is not the case any longer. My theory is presented here in details and contains all the logical support for the Hypergeometrical Gravitational Equation. I also provided the correct derivation of the Gravitational Lensing using this potential.

Currently, the mindset is such that even when a theory predicts the experimental results, it is still considered at fault because it did not produced non-observable differences based upon General Relativity equations.

Of course, this is a non-scientific reasoning. My theory predicts observed phenomena (e.g. jets comig from Black Holes - White Orifices) that are not predicted by ad-hoc Einstein equations using an ad-hoc Schwarzschild metric.

A little research on the subject showed me that the precession was already known by the time of the prediction and was in agreement with many models where the proposers guessed left and right the actual formula for the Gravitational Potential. Some of those models had velocity dependence, although not in the manner I proposed.

In addition, the precession of Mercury was the result of many interactions with the planets of the Solar System. The unexplained precession component was of the order of 43 arc seconds per century.

Let's see if one can solve that problem in a different paradigm, say, in the Hypergeometrical Universe paradigm.

First let's write the equation for the Hypergeometrical Gravitational Force.

If we consider that the Sun is not rotating, thus V1=0 the final force sensed by Mercury is given by:

Which is equation (1) on the Gerber Model presented in Jaume Gine paper.

The Kinetic Energy T per unit mass is given by:

Is the angular momentum per unit mass.

The Potential Energy per unit mass is given by:

The generalized momentum per unit mass is given by:

Similarly the generalized force per unit mass is given by:

Solving for P one obtains:

Since the Gravitational force is radial, there is no tangential acceleration. Hence, integrating equation (5)

This simple equation can be solved promptly if one considers that the terms in parentheses are very close to one for astronomical conditions.

The solution is given by:

Where ε is a constant of integration.

If one consider that

Considering that the precession of the perihelion or apogee are the same, let's consider the apogee. The precession is given by:

Then the formula for the precession rate is given by:

Gerber and Einstein obtained a more complex version of this formula. Let's see if one can simplify Einstein's equation into ours.

Einstein equation is given by:

Under standard assumptions the orbital period (

) of a body traveling along an elliptic orbit can be computed as:

Replacing the period and the semi-major axis in terms of R0 yields:

In Gerber's Gravity, the author emphasized that despite Gerber's result yielded the observed precession, it does not provide the same equations as General Relativity – as if this were necessarily a problem.

Eventually, the author tries to derive Gerber's potential using an argument based upon retarded potentials.

Since we arrived at the same equation obtained by Gerber and Einstein and we know that there has been extensive testing of this equation on the calculation of precession of other planets, spacecrafts, etc. there is no need to pose any more arguments to support the Hypergeometrical Gravitational Equation.

Overzealous Wikipedia editors concluded that because Gerber's argument leading to the Hypergeometrical Gravitational Potential was flawed and thus he did not preceded Einstein in deriving the correct formula for the precession of Mercury's Perihelion. Currently this subtle details is very relevant because the editors believe that General Relativity equations and reality are the same. Somehow, they see other theories as ad-hoc but failed to see how ad-hoc General Relativity and Einstein equations are. Anything that describes the Universe with a parametrized (Unknon) metric cannot be anything other than an Ad-Hoc theory...:)

It also seems that Gerber made a mistake in deriving the Gravitational Lensing angle. Somehow "experts" did not catch his mistake.

I did it correctly and reached the appropriate result.
So Gehrcke initiated a reprint of Gerber's 1902-paper in the Annalen der Physik in 1917, where he questioned the priority of Einstein and tried to prove a possible Plagiarism by him.[A 5]However, according to Albrecht Fölsing[B 5] and Roseveare,[B 6] those claims were rejected, because soon after Gerber's paper was reprinted, scientists like Hugo von Seeliger,[A 6] Max von Laue[A 7] published some papers, where it was shown that Gerber's theory is inconsistent and his formula is not the consequence of his premises. Also Roseveare argued that Gerber's theory is inconsistent and that the value for the deflection of light in the gravitational field of the sun in Gerber's theory was too high by the factor 3/2. And Einstein wrote in 1920:[A 8]

Thus the Hypergeometrical Universe Theory also "predicts" the Precession of Mercury's Perihelion, the Gravitational Lensing angle, the White Orifice phenomena and thus equates and surpasses General Relativity in its achievement. Needless to say, it provides the reason for having the speed of light as the limit, provides an alternative model for the Gravity induced metric (spacetime) deformation.

Gerber model is a limit of my theory where one considers that body 1 is not rotating. It yields the correct value for the precession constant (42.3 arc seconds per century).

According to Gerber, the relation of the speed of gravity (c) and the Perihelion shift (Ψ) is:

It was noted by the Einstein- and relativity critic Ernst Gehrcke in 1916,[A 3] that this formula is mathematically identical to Albert Einstein's formula (1915) for general relativity.[A 4]


Mercury is the closest planet to the Sun and the eighth largest. Mercury is slightly smaller in diameter than the moons Ganymede and Titan but more than twice as massive.

Mercury's orbit is highly eccentric; at perihelion it is only 46 million km from the Sun but at aphelion it is 70 million. The position of the perihelion precesses around the Sun at a very slow rate. 19th century astronomers made very careful observations of Mercury's orbital parameters but could not adequately explain them using Newtonian mechanics. The tiny differences between the observed and predicted values were a minor but nagging problem for many decades. It was thought that another planet (sometimes called Vulcan) slightly closer to the Sun than Mercury might account for the discrepancy. But despite much effort, no such planet was found. The real answer turned out to be much more dramatic: Einstein's General Theory of Relativity! Its correct prediction of the motions of Mercury was an important factor in the early acceptance of the theory.


Our Sun is a normal main-sequence G2 star, one of more than 100 billion stars in our galaxy.

The Sun is by far the largest object in the solar system. It contains more than 99.8% of the total mass of the Solar System (Jupiter contains most of the rest).

Under standard assumptions the orbital period (

) of a body traveling along an elliptic orbit can be computed as: