Not exactly, but I mentioned many times that their theories are Infinitas Complicata (http://hypergeometricaluniverse.com/blog/infinitas-complicata/) and that it was hubris to preclude the inclusion of other ideas into the discussion.

I kept developing the theory in this dark corner of the internet and kept my good sense of humor.  Eventually something would happen....maybe..:)

It seems that it happened.  I was invited to submit my theory to a real journal with a real peer-review.  With any luck, not as absurd peer-review as the one of Los Alamos Archives..:)

I am an eternal optimist and I always try to see the silver lining on anything. I imediately reject this was a trap by those String Theorists that I mistreated so much during the years..:)... Nooooo, Noooo...No... that can't be...:)

I used this invitation as a motivation to do better and polish the theory a little.  This is the first time I see the possibility of having a real peer review.

As one would expect, my theory evolved in front of your eyes and luckly it has been mostly consistent.  There were one known mistake on the initial evaluation of the Pioneer Anomaly. It yielded a glaring mistake on the age of the Universe.  That happened because I constrained the current microwave cosmic background to be the direct observation of the initial recombination process that placed the Universe in motion.  That blast flow by us at SQRT(2) times C (if one considers radial ilne observation. The non absorbed photons passed by us and cannot be seen anywhere..:)

The heat impounded into all the matter of our Universe that is what we can see now.  That heat (electromagnetic black-body radiation) travels at 45 degrees from Universe to Universe (if you consider each de Broglie step a new incarnation of the prior self).  Traveling at that specific angle, radiation follows the requirement of "Retarded Potentials" as it is supposed to be.  We can only see the past, from each specific point in space at specific times.

That assumption that the microwave background was the Doppler-shifted gamma rays from the initial recombination process (disregarding the 45 degrees constraint) led to a sqrt(2) mistake on the age of the Universe..:)  Needless to say, I corrected it as soon as I understood what went wrong.

You might say that this is a gross mistake but there is some uncertainty in our observations on the dynamics of this Universe.  Current models don't consider that G varies inversely with the 4D radius of the Universe and thus are always surprised when they see galaxies formed before they believed possible. Those surprises could be the result of just a time-varying G or from an Universe that is older than suspected.  I failed to do the supercomputer simulation in the back of my mind and failed to detect my initial error.

The brigth side is that I caught that error prior to facing the String Theorists.  Hopefully I will find all errors before being in the limelight..:)

Currently, I am redoing everything in a Mathematica Notebook such that people can easily verify my derivations and simplifications.  That means, that I have to learn how to use Mathematica Notebooks.  As they say, if you want something done, leave it to the busy fellow...:)

In reviewing the Pion assignement, I came across the Muon decaying path, which I thought I had paid attention.  This time, somehow, things didn't make 100% sense and I modified the assignment.  That will have to be propagated to anything that decays into Pions.   Fortunately, I was able to keep the topology (number of dilators).  Further calculations will tell me if that is sufficient. One needs to calculate the phase shifts associated with electron and muon neutrinos to find out if they are consistent with the topology.  From the back of my mind calculation, those numbers should be self-consistent.  The question is if the topology will have enough degrees of Freedom to satisfy experimental observations.  Once the muon and electron neutrinos are calculated, the only left over degree of freedom is the radius of rotation.  That radius is related to magnetic dipole moment and moment of inertia.

I will have to review the Tau Neutrino.  In the past, I thought that the Tau Neutrino was the result of an electron capture, thus rejecting the concept of an oscillating neutrino model.  Neutrinos are still uncertain in my mind.  In my theory, they can be a dilator (albeit be a coherence among different deformation levels) or they can be a different propagating mode of the deformation of space.  The dilator means that they have a velocity that is not defined by the properties of space (like matter). Being a propagating mode of deformation of space means that their speed is defined by the Fabric of Space - something like a transverse mode or longitudinal mode with frequency different from the carrier (Fundamental Dilator Coherence Frequency).

I know that neutrinos can carry different amounts of energy or momentum. The question is if that means that a neutrino is a dilator that is accelerated at different speeds or that the decay emitted different number of neutrinos carrying that momentum.  Most likely it is the first one - neutrinos have a footprint that overlaps with the Universe.  If neutrino were a propagating deformational mode them my posting on Superluminal Neutrinos would make sense.  That was what I was thinking at that time. One would expect space to have dispersion (anything have). Dispersion would open the doors to different modes having different speeds.  This is a very easy problem to solve.  If I knew the range of neutrinos energies or the neutrino energy spectrum, that would tell me if that energy is quantized (as required by neutrino being a quantum of a different mode of space deformation).

Just thinking for a second, tells me that I was wrong. I've never heard about quantization of neutrino energy or momentum, so the little guy has to have a dilator nature.  That means that there shouldn't be any Superluminal Neutrinos.. and that makes me safe once more against those String Theorist Fat-Mother catcalling...:)

Stringists...As you can see, it is easier than expected to accept an error and move on..:)

I have to review the whole hyperon family with fresh eyes.  Most of the time, I feel that I have to give deference to what I thought when I was thinking about this theory (11 years ago..:) As you know, you will fail if you compete with your younger self (most of the time).

Below is the new assignment for Pion Minus and Muon Minus: 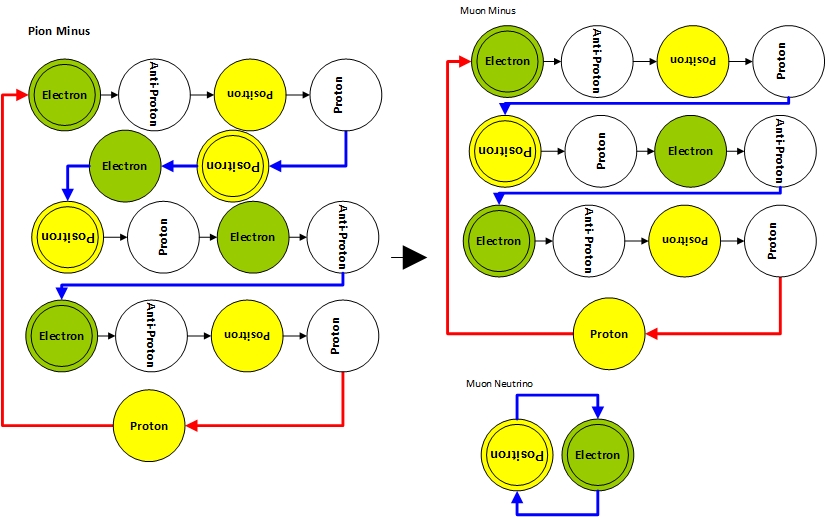 As you can see, the Pion Minus kept its triangular topology.  Muon Minus maps to what I used to call Pion Minus.

All hyperons that decay into pions (i haven't analysed what needs to change on the Pion Zero), will have to reflect this change.  I will redo the pictures and post them later.

The muon minus decay is shown below:

Wish me luck finishing this review in time for the editors of that prestigious journal.