The first Law was tackled in my paper where I provided a simple and clear explanation why things that are moving will keep moving at the same speed if there are no forces acting upon them. Of course, since my theory is geometrical in nature, that explanation will have to have space, space deformation and space relaxation. I will replay the argument here in a slightly syncopated fashion due the juxtaposition of the three laws and my effort to address each on its time..:)

Here is the plot that explains why Newton's first law exists: 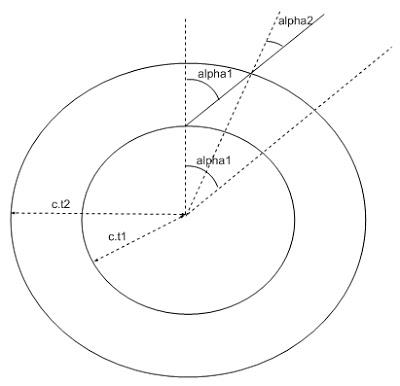 At time t1 the 4D radius of the Universe was c.t1. Let's say that a force was momentarily applied to a body (initially at rest with the Fabric of Space) and it shots off at angle alpha1. It is clear that in this R versus X cross section of the Universe that the angle alpha1 is given by artan (v/c). It is also clear that after some time, at time t2 the angle alpha2 with the perpendicular to the Fabric of Space (relaxed 3D hypersurface) is smaller due to relaxation/motion.

I proposed that this relaxation process is the reason for motion in my paper and replicate the argument here for your enjoyment.

This takes care of the first law. The second law has to do with Inertia.

I will tackle the Newton's Second Law tomorrow. The clue is that when you see a law your have to question it..:) Be a rebel... think...:) There are so many physical questions behind the simplest mathematical equation....