THERE IS NO GIORDANO BRUNO...:)

Remind me to cross out these names as possible Giordano Brunos..:)

I don't think there is a path that depends upon the kindness of strangers or the scientific integrity of scientists...:)

Here is what they refused to read or bother to rebut:

Here is a pdf with the argument support the statement of a potential systematic error on Supernova Survey Data Analysis.

Here is the data and scripts used in the plot creation for convenience:

This is a good heading... Hopefully someone will bother to rebut..:)

Let's start from the result and then digress on the painful beating I receved from this Cosmology Graduate Student, who came on a High Horse and had a Big Hat..:)

The reason I cannot complain is that his total disregard to the possibility that I could be right, led me to seek data and try to see if my theory predictions were correct.  I've never had access to this data nor time to look for it before. In fact, when my theory was created that data didn't exist (2004).

Below is the plot for the Hypergeometrical Theory predictions and their best Friedmann-Lemaitre FITTING.  I want to emphasize FITTING because it is a fitting for a theory that has many parameters.  When I was a graduate student, I was told that given enough parameters, you can fit Mickey Mouse. 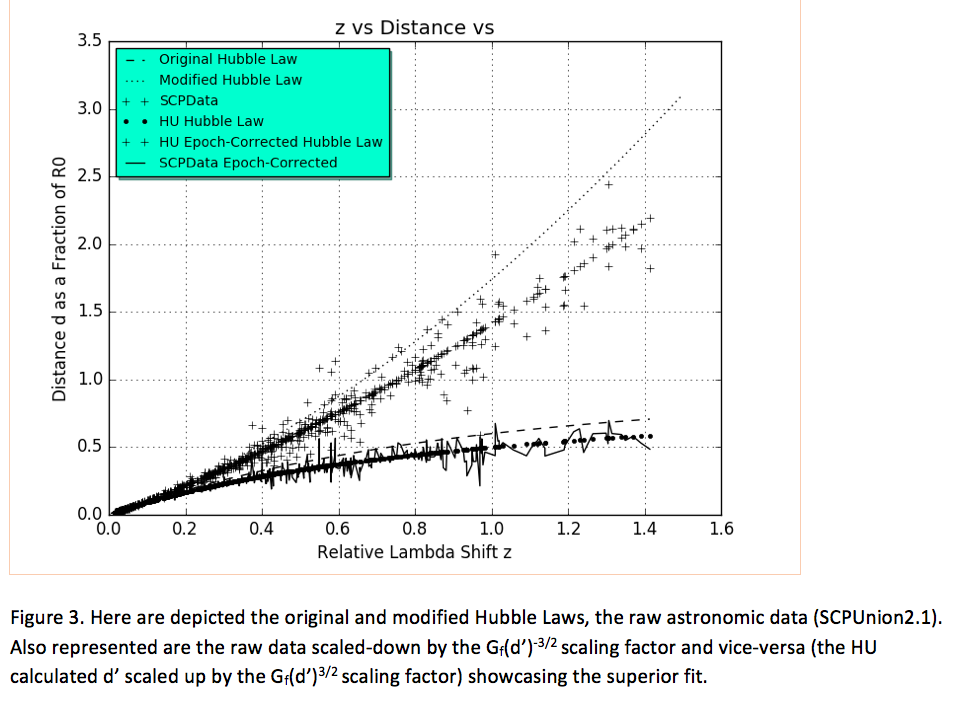 The figure demonstrates how the current science mishandled the raw data and opportunistic (but without any common-sense) theoreticians jumped into creating another layer of the Rube Goldberg machine that is Science now.

The Friedmann-Lemaitre fitting is ill fitted because the parameters we likely fitted to a subset of this broader range survey (I am being charitable).  It clearly misses reality.

The reason for this level of difficult is a SYSTEMATIC ERROR on the data analysis.  They didn't consider and don't want to consider (given that they block my theory systematically) my theory. It proposed that they Universe has this topology: 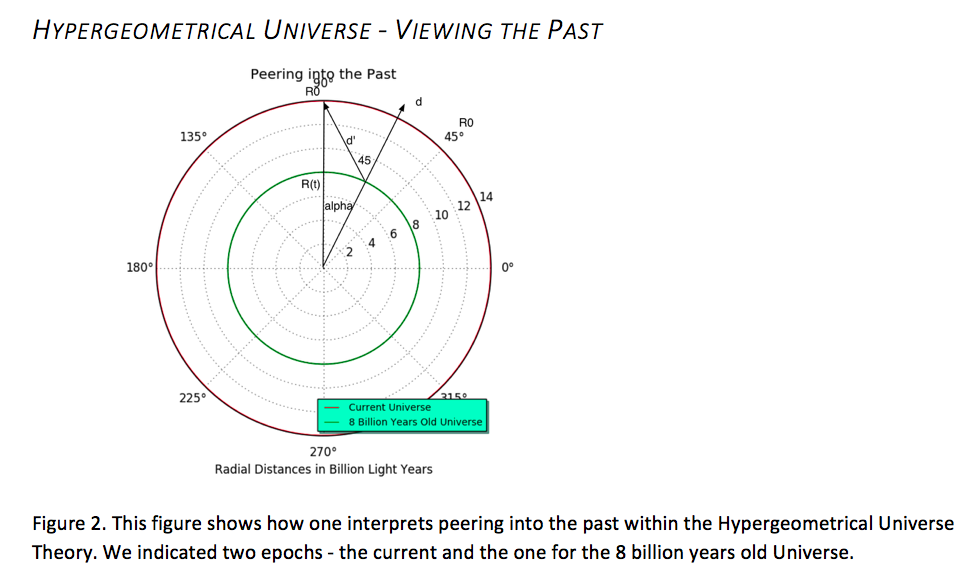 and that Gravity is inversely proportional to the 4D Radius of the Universe.

This means that the Chandrasekhar Mass and Radius of White Dwarfs (precursors to the Type 1A Supernova explosion) are smaller (non standard) at earlier epochs.  They are not equal or similar throughout the epochs, but their rate of change is clearly prescribed by my theory.

The WLR is an observed relation between peak magnitude and a measure of width. To obtain an accurate result in the face of measurement error and the temporal sparsity of observed data, both the peak magnitude and the width are measured by fitting observed data to templates determined from well-observed supernovae (Hamuy et al. 1996b; Riess et al. 1995). It is important to employ the same methods to measure the peak magnitude and width in our models. We “observe” our synthetic lightcurves by employing the MCLS (Multi-Color Lightcurve Shape) method of Riess et al. (1995), employing the revised vectors used in Riess et al. (1998) (kindly provided by Dr. Riess). We have also determined the ∆m15(B) decline-rate parameter for our models using the χ2 template-fitting technique described by Hamuy et al. (1996c). 5

While this width-luminosity relation (henceforward WLR) is very well substantiated observationally, it is an empirical relation which has remained largely unexplained. H¨oflich et al. (1996) showed that many current explosion models come close to this relation and suggested that the relation was determined primarily by the precise nature of the explosion itself. In this paper we provide the rudiments of a physical explanation for the WLR which is based upon the physics of radiation flow in SNe Ia, one in which the details of the explosion itself are largely masked. If true, this argues strongly against any significant bias arising in the WLR due to evolutionary effects in the supernova progenitors. 5

WLR is the result of an observation that the wider the luminosity time profile, the larger the absolute peak luminosity.  This is one interpretation, but there is more to it. The process of comparison requires time scaling to align the peaks and that time scaling also normalize the rasing edge of the Luminosity profile.

Below are the before and after time rescaling: 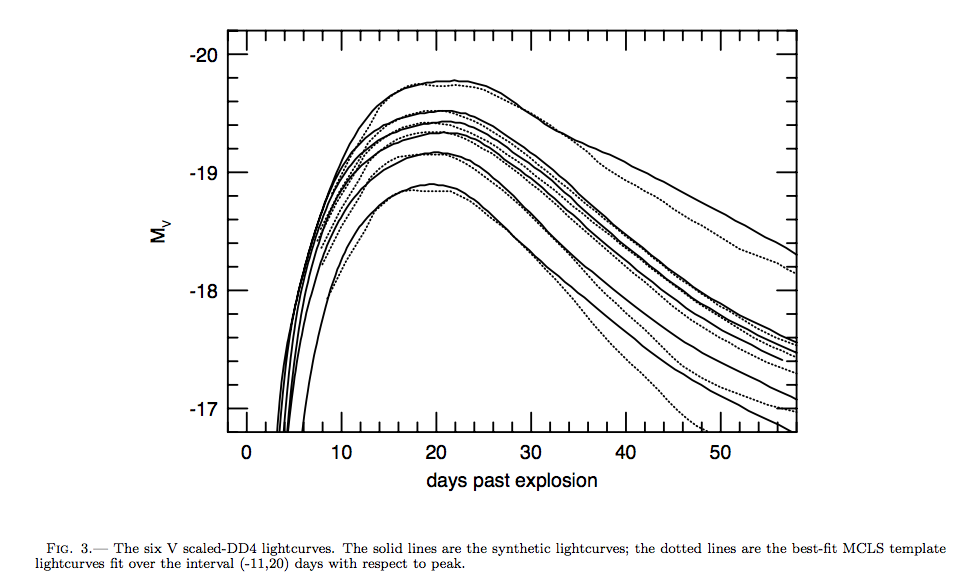 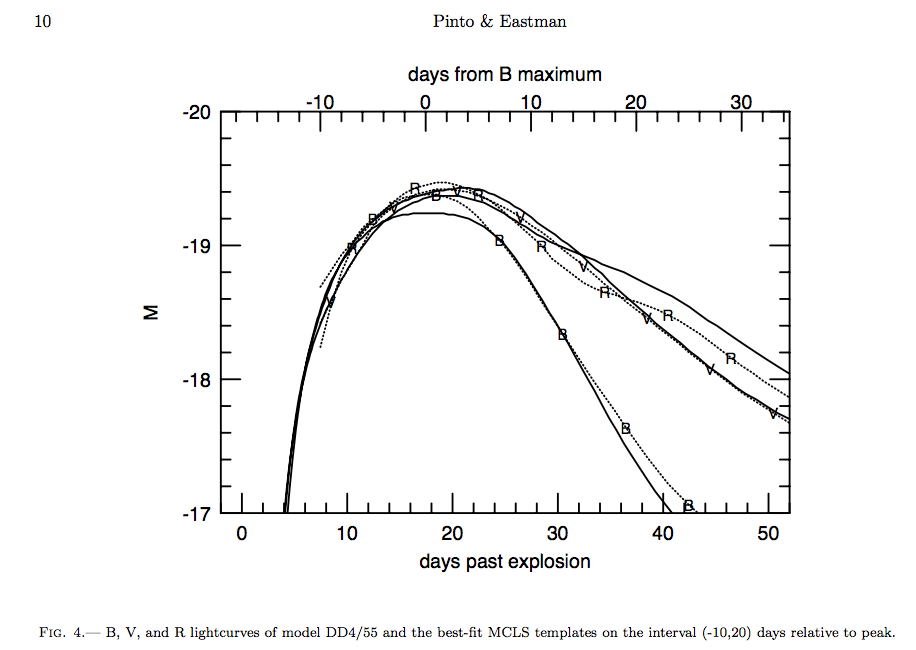 On the other hand, there is also a different attribution to how the peak luminosity relates to the width:

The WLR is thus seen to be a relation between the maximum-light luminosity and the radiation escape time; the brighter the supernova, the longer its escape time.5

Can those two be reconciled. YES.

Adding the reactions above:

If Oxygen is abundant and the second and third reactions are fast, the reaction rate is dominated by the rate of Mg creation, or by the first equation.

In another words, the process is driven by the burning of Carbon.  The Luminous output is powered entirely by the decay chain6:

Chandrasekhar mass and radius varies with G-3/2 and G-1/2, respectively.  The central concentration is easily proved to be independent upon G and so it is the concentration profile.  The White Dwarf(G) is identical to any other White Dwarf. The only difference is how long that candle will burn.

WRL starts by scalling time aligning peaks. That clearly normalize all the burning time DT.  That is equivalent to rescaled the volume while keeping the particle density.  This means that under WLR, White Dwarf(G) has [O] and [C] scaled down by G-3/2 and the total Nuclear Chemistry rate is proportional equal to k[O] [C] or G-3.

A similar argument has to do with eject. Smaller White Dwarf(G) will have less eject and thus appear even smaller.  It seems that either argument will be corrected by the same scaling, although the leading edge correction argument is clearer without the benefit of seeing the raw data.

If one consider how one measures distance from a standard Stellar Candle, the apparent distance have to be rescalled by G-3/2.

That is what you see in the figure below:

To make easier to visualize, I presented the HU Predictions together with Supernova distances scaled down by G-3/2 and also the scaled up predictions by G3/2 to compare with the original data.

The quality of the predictions can be seem from these plots: 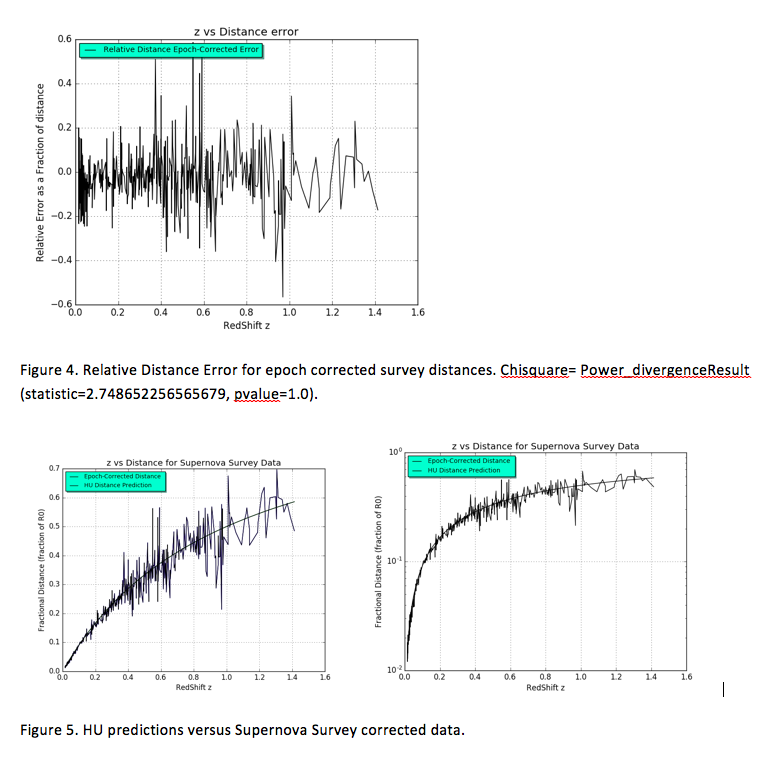 As anyone can see, the fitting lend strong support to my theory and place a tremendous challenge to Inflation Theory, Dark Matter and Dark Energy.

That is the reason why such a concerted avoidance of my theory takes place in this scientific community.

I contaced many scientists and  asked for criticism - they cowardly or arrogantly or just because they are too busy to review a simple argument that might indicate that everything they did is incorrect - didn't blother to reply.

I decided that it is time for me to criticize.  Maybe they will pay attention.  I avoided this for 12 years, since I know that there are high stakes involved.  On the hand, if I am right and they are wrong, the same stakes are also involved

I left comments to Neil deGrasse Tyson and Bill Nye.

but they seems to have just been deleted.  I cannot find them.

So much for their scientific integrity.

I guess there will be no Giordano Bruno..:)