Forgive me saying something against a God Particle, but this is a stretch... Not unlike Inflation Theory ( in fact, these are my two pet peeves)...

I am not saying that the Fundamental Dilator is the only possible solution to the problem of Mass.

I made Mass totally disappear with it...:) I succesfully replaced Mass with displacement 4D volumes within a spinning coherence: The Fundamental Dilator 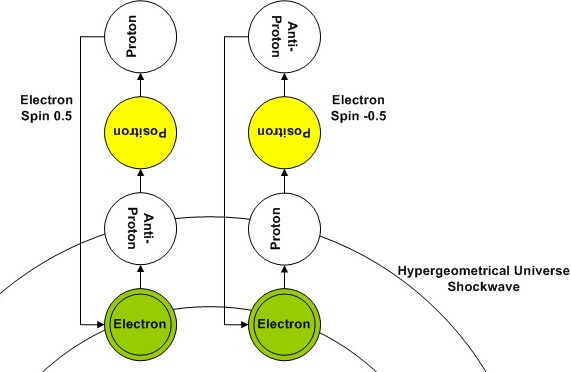 Above are two electrons with opposing spins...:) and the best explanation for the existence of Cooper pairs and the why of Hund's Law. Opposing spinning electrons show zero attraction or repulsion among each other...:) That is why you can put them neatly into orbitals...:)

I also explained why one Kilogram (inertial) of Electrons have Zero Gravitational Mass...:) Just a result of interaction averaging out to zero.

While Peter Higgs, François Englert and Robert Brout were trying to explain Mass using some God Given Particle or God Himself, I explained Mass Away...

People shouldn't mix Religion references and Science. It would be horrible if one cannot see the God Boson coming out of those Large Hadron Collider Collisions...

By the way, we know that we can make "Bosons" out of collisions (e.g. Delta Zero, Pion Zero).

Is Dr. Higgs telling me that Delta Zero, Pion Zero are The False ProphetParticles?

How would you know that you created a Boson that gives Mass to a particle... Just because it has some weight (Mass)..:) given to itself?? That would be a quite weak proof of the existence of the God Particle...

I would expect something along the lines of the God Boson coming down the pipe and interacting wih another humble particle and bestowing it the Gift of Masslessness...:) such that it would just fly faster than the speed of light out of there...:) That would make me a believer..

Of course, if one could keep such God Particle around one long enough, one could ask for larger favors like making an Apple to fall upwards or downwards at infinite speed...:)

In summary, I don't believe it is possible to attach to an extremely short-lived particle coming out of a collider the title of God Particle. It is my believe that I will have just to believe..:)

I already believe that the Truth is Out There...:)

I certainly know that whatever comes out of those collisions would be less relevant than Coherent Nuclear Fusion. I am partial...what can I say..>:)

Today, I learned that there is a great theory out there which is the most accepted geometric relativistic theory. I am looking forward to read about it... I've never managed to ask if that theory contains the concept of Mass. If a contain that awful concept, it can never be really geometrical..:)

Of course, I might be wrong, but in General Relativity, Mass takes a quite important place...:)

My theory is consistent with General Relativity but it doesn't contain Mass.

By the way, I somehow seek exactly the people who might disagree with me to collegially discuss ideas. There is little value in preaching to the choir...:)

Please, support the site...:) Everytime one clicks the Bird below, a matching grant is issued to help in the search of the God Particle...:)

I want to Believe..