The White Orifice on the Black Hole...:)

I am sure Stephen Hawking will see the silver lining in the Dark Clouds surrounding this Cylindrical Black Hole…:)

It should be a self-evident truth when one considers the so-called Black Hole with angular momentum that it cannot be an sphere...:) That is, spherical symmetry is not allowed...:)

Of course, for different masses and total angular momentum one might create Discoid Black Holes...:)

Above a certain mass and angular momentum the obvious Black Hole topology has to be cylindrical..:)

If you remember the correct Law of Gravitation from my Gyrogravity posting:

Let 1 be a Hollow Cylindrical Black Hole...:) rotating at the speed of light.  Well, I preferred Cylindrical, but I am sure a Bagel-like (torus)...:) would also work...:) 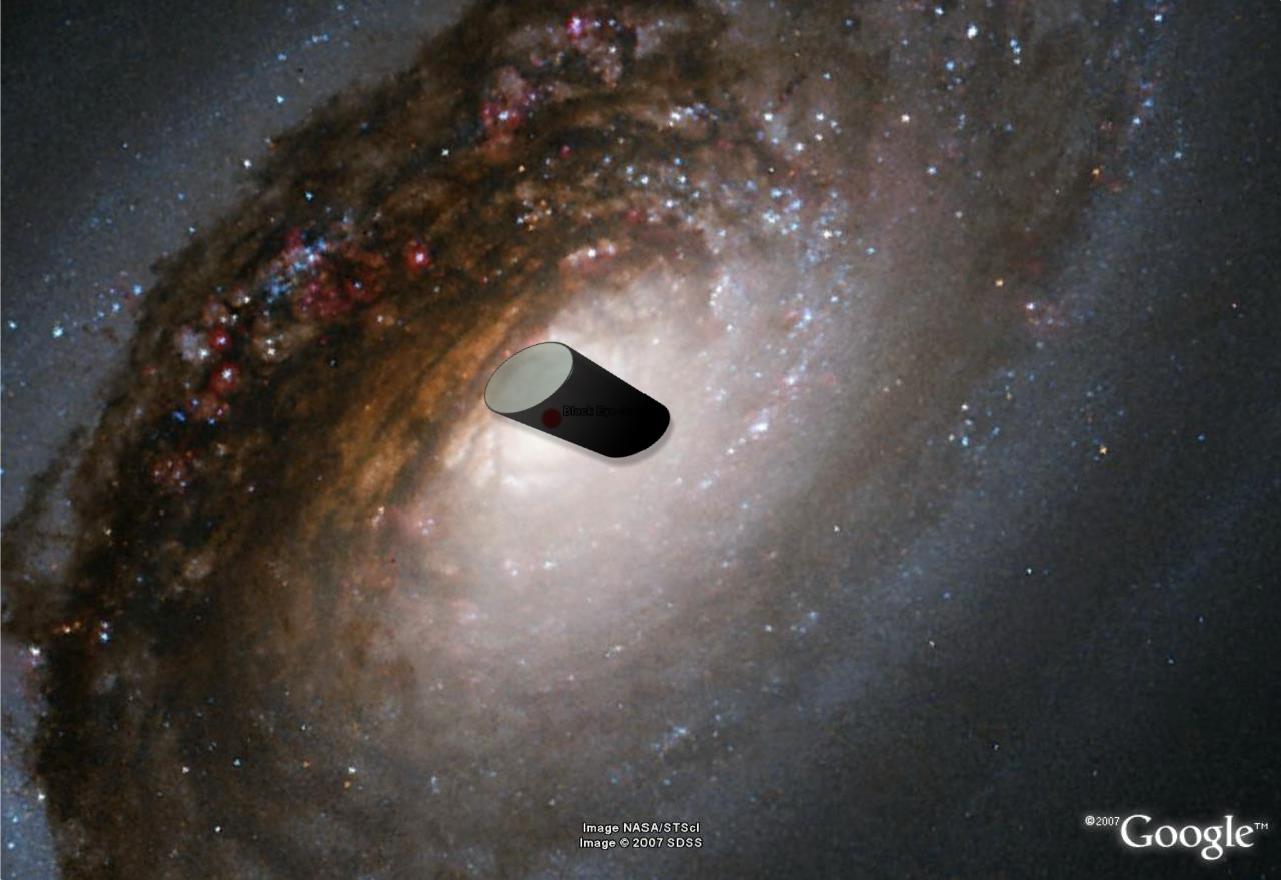 First let's consider the matter surrounding the cylinder...:) Let R versor to be perpendicular to the axis of symmetry (rotation). Under those circumstances R.V1 is zero (perpendicular) due to the rotation of the cylindrical mass element 1.

The potential sensed by particle 2 (surrounding matter element of mass) is given by:

Where v1 is a tangential velocity at the Hollow Cylindrical Black Hole which is equal to the speed of light…or thereabouts…:)

Under those circumstances it is easy to see that the force acting upon particle 2 has a radial component and tangential component due to the V1.V2 scalar product. The tangential component makes the surrounding mass distribution to whirl around trying to catch up with the cylindrical black hole. At the same time the tangential speed increases, the radial force decreases. This creates a dietary barrier for the Cylindrical Black Hole...
On the other hand, any mass rotating around in the opposite direction is slowed down until the rotational direction matches the cylindrical black hole…:)

Mass traveling with angular momentum along the rotational axis will be attracted to the cylinder until the rotational coupling with the rotating cylindrical black hole spreads the mall around itself.
This theory provides the reason for Silent Black Holes.  They eat, somehow get smaller and faster rotating until they start rotating their surroundings away.  At that time, their topology is basically a linear, hollow, cylindrical, oriented Gravitational Monopole.
The fun part happens when we analyze what is happening to the mass flow traveling without any angular momentum right along the cylinder axis. For those particles, V2 is perpendicular to V1 (the tangential velocity of the surface of the cylindrical black hole…) The resulting potential is given by:

This force has the interesting aspect of attracting more strongly the falling matter than the matter being ejected on the other side of the Cylindrical Black Hole…:) Of course, this would happen for both sides of the cylindrical black hole... Any collision would trap the colliding particles inside the Black Hole.
Of course, once inside the cylinder, matter would suffer little lateral gravitational attraction..

This means that two collimated jets would arise on each side of the Black Hole…:) rendering it a White Orifice on the Black Hole...:)
Of course, Newton's and therefore Einstein equations cannot predict the velocity dependence of Gravitation because Newton's Law is not as fundamental as my theory.

Life is Stranger than Fiction...:)
Cheers,

MP
Visit my Spin Blog or Double-click the Bird below to find out more about censorship of this theory..>:)