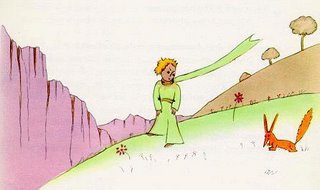 This is simple and effective; though I am no physicist, it seems to hang in self-consistently.
It is also true that Antoine de St-Exupery reached there first, and it is good that due credit has been given in the citation.

The Beginning of Times is both a scientific and philosophical posting.  The scientific aspect of it, is the logical support for the amazing (to me) discovery that the actual speed of light is sqrt(2) times the observed speed of light. That is the linchpin holding together the philosophical conclusion about its close relationship with Cause and Effect and the Ontological Question: WHY?

Although logic is always clear and direct, the beauty of the conclusion and the events associated with the Anthropic event that begets the question WHY can only be conveyed with the sensibility of Antoine de St-Exupery's Little Prince...:)

In the past, I mentioned that I didn't try to read God's mind or anything that conceited.  I tried to see what the brilliant minds of my precursors created and what could still remain in a more consistent theory.  I kept Strict Relativity or Lorentz transforms and explained the WHY they needed to be used.

They are a contrived solution to the problem of starting with the wrong equations (equations of motion) instead of using the Quantum Lagrangian Principle.  I also kept the quark representation for some Hadrons, although I associated them with axes lengths of a four dimensional ellipsoid of revolution.  Energy conservation is associated with the 3D volume in the Hypergeometrical Universe.  Inertial Mass also equal to the 3D Volume of dilators. 4D Mass or charge or gravitational mass is associated with the 4D displacement volume of the dilator coherence.

Of course, I had to replicate our known Physics otherwise nobody would take my theory into consideration..:) and they shouldn't.

I humbly used the Little Prince to express feelings in a manner superior to what I could have done. It expressed the awe in the view of the Universe as in The Beginning of Times and the solitude of being the creator of an idea which is not incremental..:) and thus has to be fought by the establishment...:)

Loneliness, has also been expressed using my dear friend The Brain..:).  His tireless pursuit for world domination has a strong similarity to my Quixotic effort to help by bringing about a better understanding of the Universe.

I would had used more Don Quixote if I could find pictures of the theme.

There is a lot of Don Quixote in me.