Matter and so-called anti-matter are simply materials in opposing condition, they are not opposite ‘existences’. If they were, then when they came into contact they would not merely change condition, they would mutually annihilate. No properties would remain.

My dear reader asked me about the matter-antimatter annihilation process.  He loosely uses the term "condition" and "existence" to represent what is in my theory a very well defined local metric deformation.

The nature or condition of being matter or being antimatter is just a matter of phase in the four notes fundamental dilator coherence sequence.  If I define proton as being a local metric stretch at this exact moment, an antiproton would be an "exactly" deformation in the opposite phase (i.e., it would be a local metric contraction).

In addition to metric deformation phases, a dilator (matter or antimatter) would also have linear and angular momentum and an extrinsically defined spin (a rotation around an axis perpendicular to R and X, Y or Z).

Of course to send the whole Chimichanga to NILL one would have to add a Gamma Ray photon with exactly the opposing phase, direction such as to cancel the outgoing Gamma Ray.

This seems to be a very fortuitous event, that is, to have the electron-positron pair plus an incoming gamma ray with the exact alignment.  It is and it never happens, that is, normally matter-antimatter annihilation never generates a perfectly flat space.  It normally generates the dilaton field associated with the outgoing Gamma Ray.

Below is a refresh of how does Matter-Antimatter Annihilate each other.  Please, feel free to ask questions.

How does Matter-Antimatter Anihilate each other???..:)

Ask this simple question to a physicist. After looking like a deer on headlights for a some time, he/she will start mumbling something and writing some Feynman diagrams showing wiggling lines representing photons, positrons and electrons..:)


The same thing will happen if you ask them how a photon is created etc, etc...:) It is a crying shame...:)

You will never get anything that has a physical meaning... just lots of hand waiving while providing the interpretations of Feynman diagrams..:) NO PHYSICS...


I have to defend Feynman at this point. I am his unconditional fan....:)


His diagrams represent complex integrals and make easier to think about the Physics behind those equations.

The problem is that this is great if the mathematical representation of reality is perfectly defined by those integrals. If they are not, then the diagrams will mislead you into thinking that any reading of an integral has a physical meaning.


The other horrendous outcome is that any time people believe they know everything, and apply that last layer of varnish on the mathematical constructs, they will react more strongly towards any change... not unlike the reaction of a building contractor when faced with a different request from the owner when the building is about to be delivered...:)


They just want to finish the building...:) 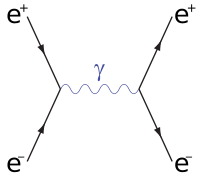 
Does that really happens???? I don't think so... at least not in heavy nuclei anomalous gamma ray scattering...

This is another Feynman diagram with a different interpretation...:) Here electron-positron anihilates and two gamma rays are released. This is a diagram for low kinetic energy scenario where the total linear momentum is close to zero and conserved by the emission of opposite traveling photons after the e-p anihilation...
This makes more sense. If there is an initial 3D angular momentum, there might be emissions to conserve 3D angular momentum...:)

This is a tricky question since current physics has no idea what happens when matter-antimatter anihilates each other...

The reason for such trouble is the Higgs boson based explanation for mass. When a positron-electron pair disappears, mass disappears... thus the explanation can never be simple...Mass is a very complex problem for current minded physicist... in fact, an intractable problem....:)

In my theory, mass is just a 3D overlap of a 4D displacement volume at specific phases of a spinning coherence (fundamental dilator)....:) a very simple thing... which can be clearly stated in this short paragraph...:)

Of course, I know that a simpler explanation doesn't make a theory correct. It might make it more desirable if the simpler theory explains everything and more than the complex theory...:)

I would never use Ockham's Razor -

Ockham's Razor is the principle proposed by William of Ockham in the fourteenth century: ``Pluralitas non est ponenda sine neccesitate'', which translates as entities should not be multiplied unnecessarily'.

for the simple reason that that principle should be used at the creation of hypotheses and cannot be used to eliminate competing theories...and that might be a stretch since simplicity is not necessarily a requirement in the creation of the Universe... but, that said, that it is likely to be the case...

By the way, Ockham's Razor speaks about generalization. Don't generalize conclusions unless the conclusion is necessarily general... As far as I can tell, it has nothing to do with simplicity...

I simply hate that expression.... for the aforementioned reason... One can use Ockham's Razor to validade Santa Klaus, Eastern Bunny or any religion, cult, crackpot idea etc...:) in addition that I find it pompous pseudo-reasoning...:)

Ockham's Razor was never meant to be used to help choosing between possible theories (explanations). Its valid usage is in choosing hypotheses prior to the creation of the theories...

For a theory to be preferable it has to be more than just simpler... It has to explain everything and more... and I mean a lot more.... Even under those conditions, the two or more theories should coexist until one of them contradicts reality...

I make only one exception for the Hypergeometrial Universe theory....:) since this is not only simpler but also only geometrical...:) that is, IT IS ALL ABOUT SPACE..:) under those very specific conditions Ockham's Razor together with the statement (Never say Never; make perfect sense :) (just kidding)...

Let's take a look on the anihilation process step by step..:)

Below is the diagram of the dilator interaction and the more complex coherence creation.


This means that according to my theory, anihilation depends upon a spin Minus ONE muon neutrino capture or creation out of their kinetic energy (angular momentum)...:) I am sure that is not in those Feynman diagrams..:) By the way, a spin minus one muon neutrino corresponds to two transmutation notes spinning in the same directions. 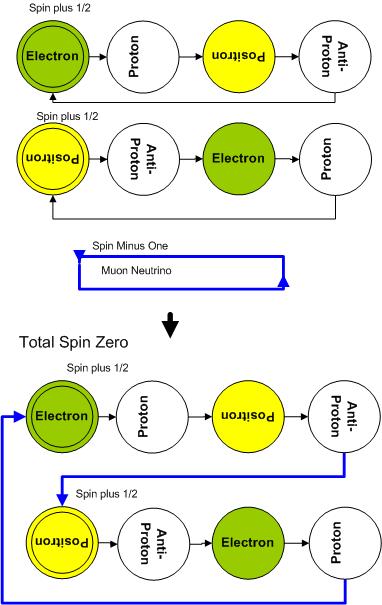 The other salient aspect of this equation is that once the coherence from the second diagram is created that coherence itself decays through a secondary coherence (coherence squared) with Naught..:) That means that the electromagnetic field appears as the result of a coherence between the electron-muon neutrino-positron complex and plain unadulterated flat space..:)

As you can see the electron-muon neutrino-positron is a double chord coherence, that is, it is composed of two fundamental dilator subcoherences and two transmutation notes (half muon neutrino)...:)
The half-muon neutrinos correspond to 3D spatial rotations, thus those sub-coherence look like 3D rotations of the positron-electron pair...:)

It should be clear that the positron-muon neutrino-electron dilator coherence is a doublet, that is, due to the uncertainty on which phase is in phase with the 3D Universe, the two isomers coexist forming a dipole. This dipole oscillates at each de Broglie step of the Hyperspherical Shockwave Universe Expansion. In addition, this modulation is modulated by the oscillatory factor due to the coherence between this coherence and the flat 4D metric state or flat space.

The original dimeric coherence (two fundamental dilator chords) generates their standard dilaton field. The secondary coherence between this dimer and flat space creates another cosine factor that is equivalent to a transposition between the positions of the two fundamental dilator thus generating a phase modulation of the dilaton field. This is similar to the dilaton field modulation due to electronic coherences in excited chromophores. At the end what causes an electromagnetic wave is a charge motion (like in an antena..:)

This secondary modulation occurs at the frequency of the emitted gamma rays...:)

If there is any initial 3D angular momentum that becomes a third modulation and thus a third driver of gamma ray emissions... This means that at least two and maybe more gamma rays will be emitted from a electron-muon neutrino-positron complex coherence...:)

That should come up as a shock... who would guess that flat space would play any role in the Universe.... Flat space is the ultimate ground state of an Hypergeometrical Universe.

This is the physical representation of matter-antimatter annihilation.

I should rave a little about the prejudice against anything originated in classical mechanics or classical electrodynamics. The classical picture of coherences (MHS) is perfectly valid in an electronic transition, since the expectation of a dipole operator has a perfectly classical analogy...:)

There is also another prejudice that is a hindrance to a rational evaluation of my ideas. The prejudice is derived from too much reverence towards the people who preceded us. Einstein tried in vain to find a link between classical mechanics and quantum mechanics and failed. The same is valid for everyone else. Schrodinger equation is derived in terms of equivalence principles, which are principles - something that one cannot explain and justifies itself by its own success explaining the world.

In the past, I ranted against censorship of my theory by the Cornell-Los Alamos e-print repository moderator.

As the theory get more recognition, this becomes a moot point although censorship is never irrelevant.  Somehow this good idea managed to survived and hopefully it will someday thrive.