A new particle Y(4140)is baffling Science, more specifically Quantum Chromodynamics and the Standard Model. It should be no surprise that that particle is perfectly explained within the framework of the Hypergeometrical Universe.

This is the Wikipedia entry where I get most of my information...:)

Because it decays into J/ψ and φ mesons, it has been suggested that this particle is composed of a charm quark and charm antiquark. 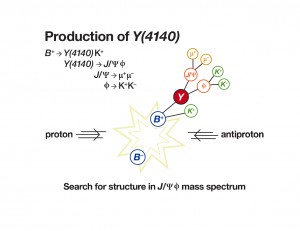 I already provided the the Hypergeometrical Standard Model representation for the decaying products of this particle and it shouldn't be difficult for a reader to figure out what is the structure of particle Y(4140).

I will give the answer this weekend when I have more time to dedicate to the Hypergeometrical Universe.