The Hypergeometrical Y(4140) and Particle J 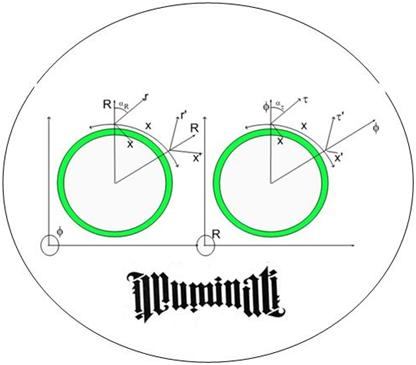 The Hypergeometrical Y(4140) and Particle J

In the past, I joked about being part of the Illuminati association. I rarely read fiction but I enjoyed reading "Angels and Demons" by Dan Brown.

It helped that it was about scientists and that I had just come back from Castello di Sant'Angelo and the Vatican.

My allusions to the Illuminati have less to do with their anti-religious nature and more with their Illuminating aspects.

The Illuminati were supposed to be formed by scientists – people who could see Nature for what it is; without dogmas and preconceived ideas.

If you read this blog you might be an Illuminati in that sense – someone with enough of an open mind that can envision a world without the dogmatic Standard Model.

Remember that the Standard model makes very precise predictions and so does Nostradamus (in retrospect and after one uses pattern recognition to associate whatever happened with whatever was written in his books)..:)

The table below contains all the hyperons I described within my theory. There might be more of them but if they were not in this table I didn't describe them.

A notable exception is particle J. In my teenage years I came across it when its discovery by Dr. Ting was announced. At that time, I thought that that particle would convey the force that limited the speed of bodies to the speed of light. Of course, I was wrong. It is now a pleasure to describe it in this blog.

This is particle Y(4140) decaying process: 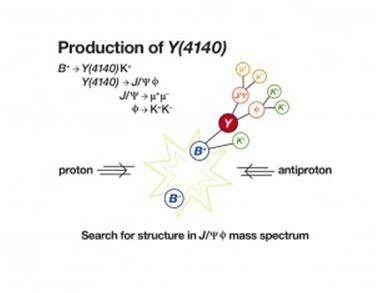 As I mentioned in my prior blog, the Hypergeometrical Universe theory has no problem describing its nature.

The mass prediction will be left to another blog. It is a simple problem.

Let's reconstruct particle Y from its components. First let's see where muons come from and how are they described here.

First let's consider the long hand representation of Kaon Plus. It decays into a Pion Zero and a Pion Plus. 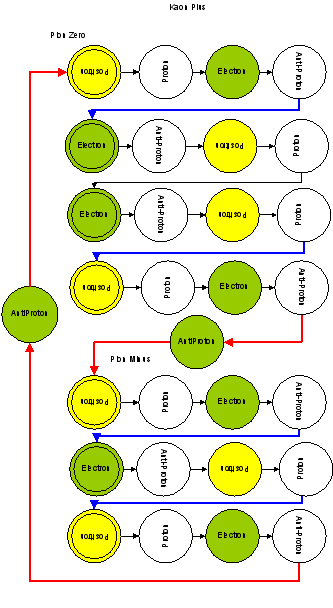 Similarly, Kaon Minus decays into Pion Zero and a Pion Minus. Remember that Pion Zero is a Majorana Particle. 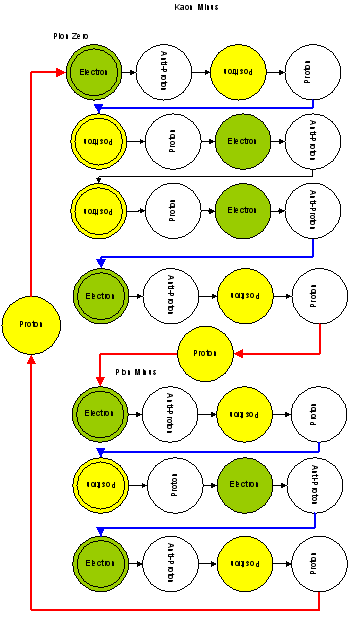 The secondary decay channels are:

Below we have an irreducible representation of Kaon Minus and Plus. Notice that the number of transmutation lines is kept as well as their respective charges. 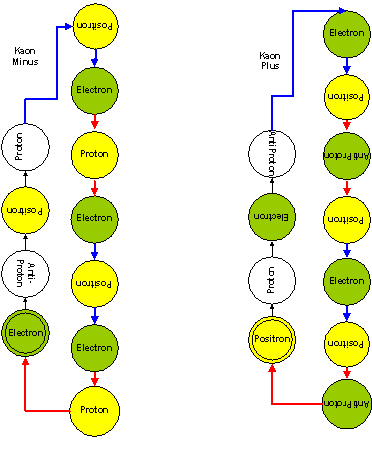 Each horizontally written Ball can represent a four note dimensional chord or a single state in the state representation of the particle in the short-hand notation.

The difference between both states is just the length of the coherence, not the particle observable characteristics (charge or mass). 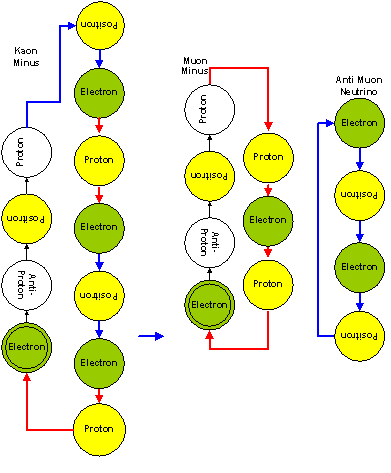 A secondary undistinguishable channel is shown below: 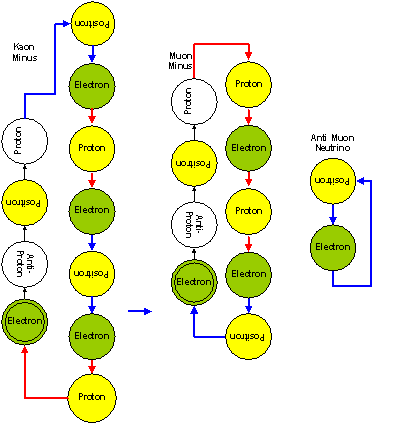 The KaonPlus -> MuonPlus + MuonNeutrino decay is just changing red by green and electron by positron, and antiProton by Proton etc.

The Neutrino Tau is the last Neutrino to be considered and it is basically the same thing as the irreducible representation of the Kaon. Neutrino Tau also decays into a MuonPlus plus a MuonNeutrino...

Now we are ready to express Particle J within the Hypergeometrical Standard Model. Particle J is formed of Muon Plus and Muon Minus, thus its Balls Diagrams looks like this: 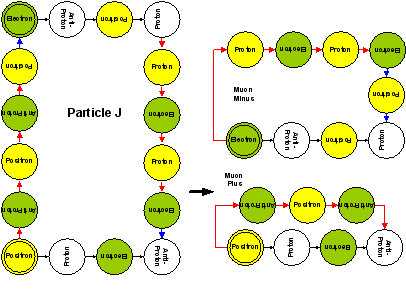 Any Illuminati will readily realize that Particle J is the Illuminati Diamond..:) 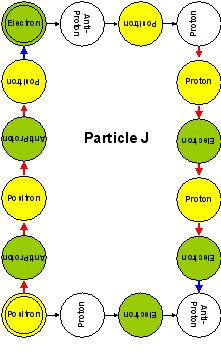 Now that we know how to represent the Particle J one is left with the simple problem of creating the Particle f out of two Kaons (Plus + Minus).

This is a simple problem.

Below is the Particle f components: 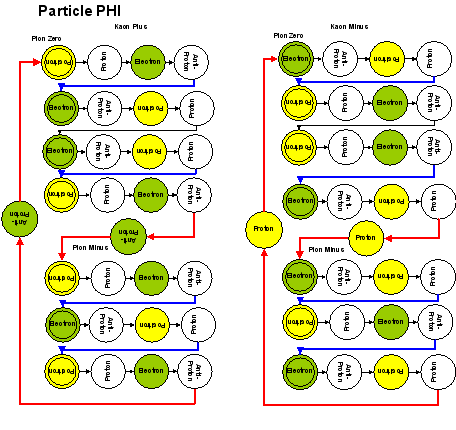 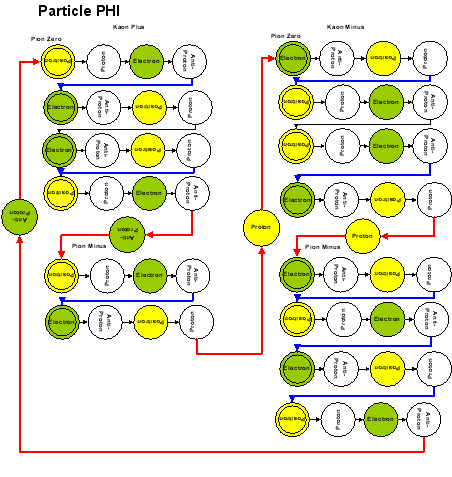 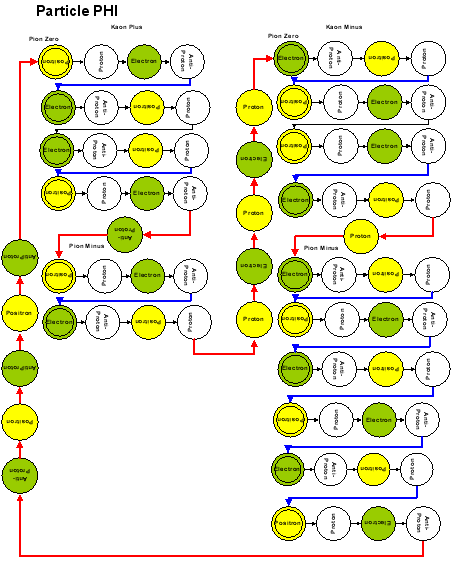 Where the blue and red lines are the transmutation dimensional chords mentioned in the beginning of the Hypergeometrical Standard Model.

One less mystery in this Great Universe of Ours.

PS- By the way, the Science is easy. Difficult is to publish it at Blogger..:)

For better pictures, visit my other blog

The Meson B can be easily recovered with the information I provided in this blog.  If nobody can do it within a week I will do it next weekend..>:)