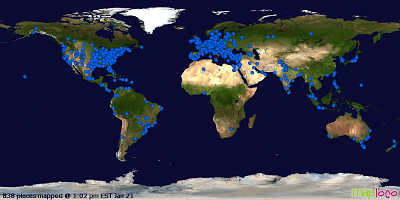 Nothing like not being able to think to become vain..:)

I've the flu so I can barely think.. but writing about things I like and know should be a natural choice.

First, let's celebrate a few milestones.  The first one is on the upper right panel containing the Blogged Editor's review of my blog.  I got a Very Good rating and am thankful for that. For me this is a tremendous compliment, since the Editor reviewed the blog not for content although I hope he executed standard crackpot testing..:), but for style, readability and other literary measures.

The map above shows the distributions of readers, showing that little by little this theory is becoming part of the discussion which is why I wrote this blog.  The number of unique URL readers is actually around 43 thousand readers, a very large number for such an obscure and challenging subject.

The  proceedings of the symposium were finally published by the American Institute of Physics. The abstract is here.

This paper presents a simple and purely geometrical Grand Unification Theory. Quantum Gravity, Electrostatic and Magnetic interactions are shown in a unified framework. Newton's, Gauss' and Biot-Savart's Laws are derived from first principles. Unification symmetry is defined for all the existing forces. This alternative model does not require Strong and Electroweak forces. A 4D Shock -Wave Hyperspherical topology is proposed for the Universe which together with a Quantum Lagrangian Principle and a Dilator based model for matter result in a quantized stepwise expansion for the whole Universe along a radial direction within a 4D spatial manifold. The Hypergeometrical Standard Model for matter, Universe Topology and a new Law of Gravitation are presented. ©2010 American Institute of Physics

This is the goal I had in mind when I started this blog. I wanted to provide an outlet for this idea.  If is right or wrong, that is to be decided on a debate among ideas not by censorship.

As I mentioned in the prior blog, there is still a factor of two to be corrected in this paper.  I will review it before to long.  It is interesting since it will show that the Hypergeometrical Standard Model predicts a relationship between charge and spin..:) Well, one  can just review the Delta Plus Plus already discussed in prior blogs to have a glimpse of the future...:)