The Twisted Deltas - Delta Plus

The Twisted Deltas - The Delta Plus

You haven't seen anything until you see the Twisted Deltas...:)
The Deltas have spin 3/2...:) and are complex dimensional multichords. They are also big and difficult to blog. Blogger makes them too small to read, almost... Later I will post links to the full size pictures.
The same diagrams will be in the updated Grand Unification paper as soon as I finish polishing it. The old version is on the papers section of this blog.
Below is the Delta Plus....I should be self-evident that one can decompose it into a Neutron and a Pion Plus...:) Well, maybe you might need a little help here... 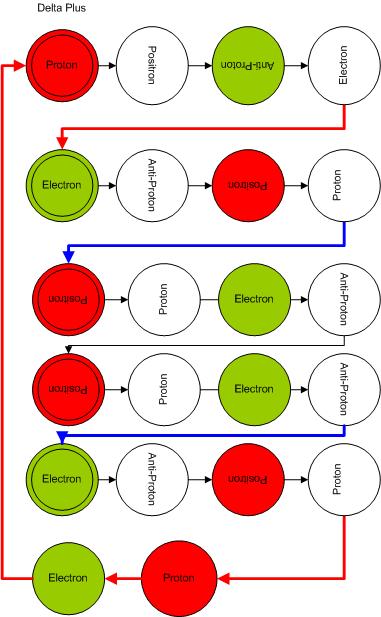 Below is the Neutron plus Pion Plus decay products. 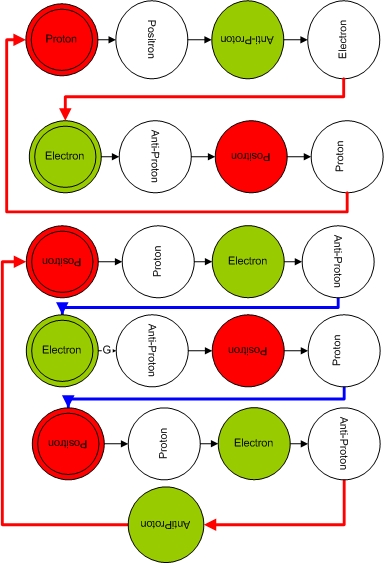 Notice that one made use of the fact that a Electron-Proton-Electron is the same things as a Positron-AntiProton-Positron transmutation.

This happens to all Deltas and All Sigmas. The Sigmas have spin 1/2 while the Twisted Deltas have spin 3/2 and that is an important difference derived from the spins associated with each dilator and each transmutation transition.

Within the Delta Family all members have four red and two blue lines. The trasmutation lines are the cause for spinning dephasing and thus Fabric of Space Strain. The Positron, Electron, Proton and AntiProton chords have all the same standard lenght. The transmutation transitions correspond to coherences between states other that the two ground states associated with the dimensional 4D double potential well.

The way to think about decay reactions with the help of the Ball Diagram above is to reconnect the red lines to form a Neutron and move positron chords such that one recovers the basic Pion Plus plus a Neutron coherences and later recognize that the Electron-Proton-Electron sub-coherence has the same length as the Positron-AntiProton-Positron. Replacing the Electron-Proton-Electron sub-coherence by a Positron-AntiProton-Positron sub-coherence allows for the recovery of the Pion Plus diagram thus demonstrating that a Delta Plus (spin 3/2) can decompose into a Neutron plus a Pion Plus, both with spin half.

With respect to the spin conservation breakdown, there are two possible explanations. The first one is that this is an experimental error. The second and most likely alternative is that 3D volume projection (what we call energy) is conserved during the decay and not spin. Spin is only conserved as an aggregate value for a group of particles and not as a quantum number to be conserved across decay processes.

To understand how the Delta Plus can decompose onto a Proton and a Pion Zero, one needs to count spins and make sure that they add to 3/2 (Delta Plus). Well one has a Proton, 2 Electrons and Two Positrons in addition to two Blue and Four Red transmutation transitions. Each collored line corresponds to plus or minus 1/4 spin. This adds up to a total of 8 1/2 spin subchords. The best way to get 3/2 is to make all transition chords to spin again each other and to make one fundamental dilator to spin contrary to all the other four. .... so one has to make sure that each set of two transition lines to have opposing spins (1/4 and -1/4), and that the dilators chords to have (-1/2, 1/2, 1/2, 1/2, 1/2 ) resulting in a total of 3/2 spin. Similar configuration assignment will be used on the Pions.

These last two red lines can be left with the Proton resulting in a straigh Proton in the case of decomposition into a Proton and a Pion Zero. 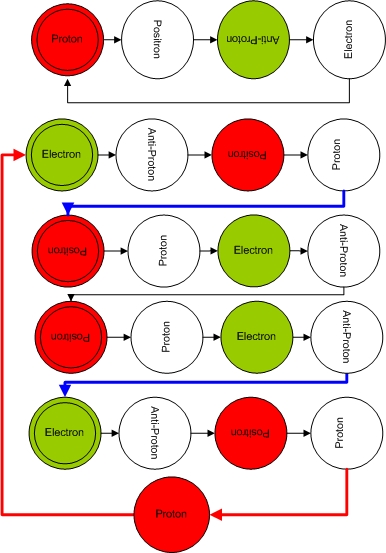 Notice that if the red lines carried the same spin, they together (Electron-Proton and Proton-Electron together ) would correspond to an anti-Neutrino and carry the spin 1/2 in the Neutron model.

Next we will deal with the Delta Minus