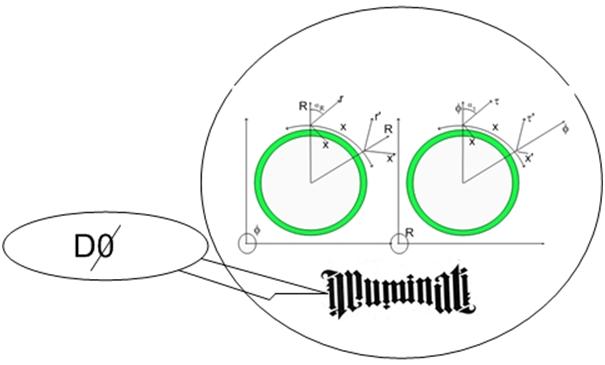 Last week I had the pleasure of sharing the company of a very bright young fellow from the D0 project during a trip from Brazil.

Of course, we know how they work. In the case they are caught, Fermilab will disavow any knowledge of their existence and they would have to take the cyanide pill – You know, one should keep appearances…:)

We discussed many aspects of my theory while he grilled me and reached conclusions based upon the little knowledge I was able to impact during our brief conversation.

He proudly showed me that he worked on the measurement of W-Minus boson mass and that he is what physicists called a Theorist's Theorist (Theorist Squared), that is, the highest level of abstractionist possible while still being called a physicist…J some called them mathematicians behind their backs..:) ( I am one of those...:))

D0, which I will call Rafael as a homage to the Illuminati painter ..:) for sake of keeping the innocent safe, told me several things. 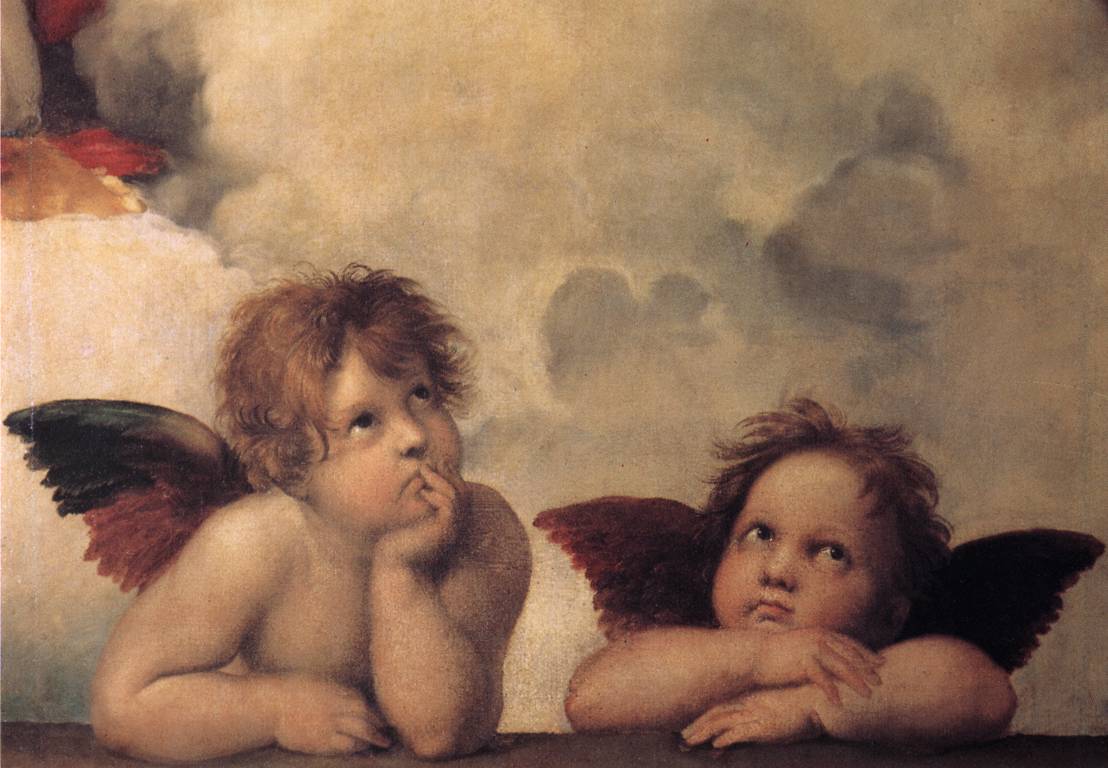 One of them is that they had just measured the mass of W-.

D0 (DeltaZero) mentioned that he did not see value in my theory bridging the gap between Classical and Quantum Mechanics and even mentioned that that bridge is a simple graduate school class exercise.

He failed to realize the meaning of the word Principle in Equivalence Principle. A Principle is proposed when there is no way to derive the result from a previous theory. It is the basis of the subsequent theory or logical framework – in this case Quantum Mechanics.

In saying that one is imposing the hidden hypothesis that particles have to be described by continuous functions as opposed to state variables (position, mass, momentum) which are just numbers. Of course I mentioned Rafael that Albert Einstein spent his whole life trying to figure out how to link Classical and Quantum Mechanics. That would normally be enough to establish that understanding how the classical view of the Universe and the quantum view of the Universe link together is relevant.

I also mentioned that the fifth dimension (R) and the Quantum Lagrangian Principle and the Fundamental Dilator Paradigm naturally introduce the spatial uncertainty and wave character to the dynamics of dilators.

D0 is just an outstanding graduate student but the failures of basic understanding are common to all practitioners in love with form while not paying enough attention to the underlying physics. Of course, theorist's theorists are to blame if one needs to name names…:)

Of course, W- is the particle that "carries the Electroweak Force" and it is responsible for the Neutron decay etc.

Here we described Neutrons as well as any other particle as being coherences between deformational states of a 5-Dimensional Metric. Since many of the particles interact, they are described in terms of the Fundamental Dilator coherence, as a result of a simple Fourier integration consideration. All interacting particles should have non-zero interaction integral, that is, one cannot have non-correlated dilator coherences and have a non-zero interaction.

Dr. Illuminati above shows two cross-sections in the place of his eyes. Those cross-sections are where our beloved 3D Universe is at..:) Where you read X, you could read Y or Z. For bodies without orbital angular momentum, there is a complete symmetry and X,Y and Z can freely rotate with respect to R (the radial direction). Angular moment breaks this symmetry. Later I will explain how to solve all our energy problems and interstellar travel problems using this little bit of information…J My bright D0 (DZero) fellow should be able to understand this obscure statement... Well, perhaps not, since it doesn't come as a symmetry but instead as a breakdown of symmetry…:) (Don't try to use Noether theorem here..:)…

I've been very critical of theorist's theorists since they cannot understand the value of physical insight. That said, I certainly value their abstraction capabilities. In my time, we used to propagate Green's functions by hand… now-a-days the same equations are propagated by Mathematica, Matlab, R or Maple packages. This makes life easier, people more productive but also makes physics less visible. All of this doesn't make the people less brilliant, specially Rafael who is a brilliant person. As you know, a brilliant man or woman will reach the correct or wrong conclusion faster than a less intelligent person. The quality of the conclusion (right or wrong) depends on which hypotheses one chooses to begin one's reasoning…:)

Well, if that is the case that will yield a very clear prediction within my theory.

My theory contains only four experimental parameters. One is the Planck constant which relates mass to wavelength projections onto the 3D hypersphere surface. The second is the speed of light. The other two are angles associated with the Electron-Proton and Positron-Electron transmutation notes.

There are other minor parameters (moment of inertia) which can be derived from first principles and geometry.

This description shows the two red lines corresponding to the Electron-Proton transmutation notes.

This diagram leaves W- without a description. It just happens that before the electron and anti-neutrino appears a Boson (W-) has a brief existence. Of course, this is not a problem. Below is the channel containing the famous W- boson. 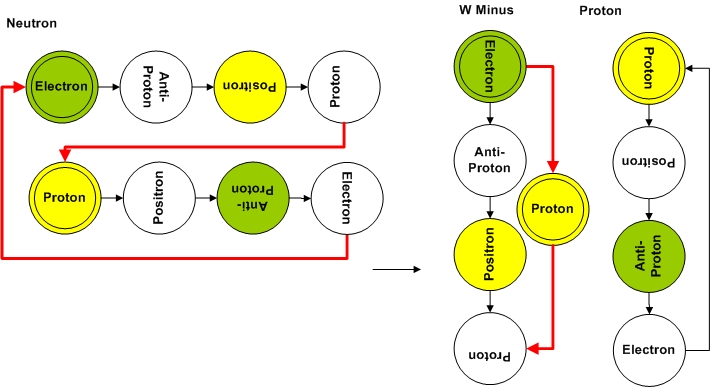 To understand what this means one has to look into the state description of the Neutron. 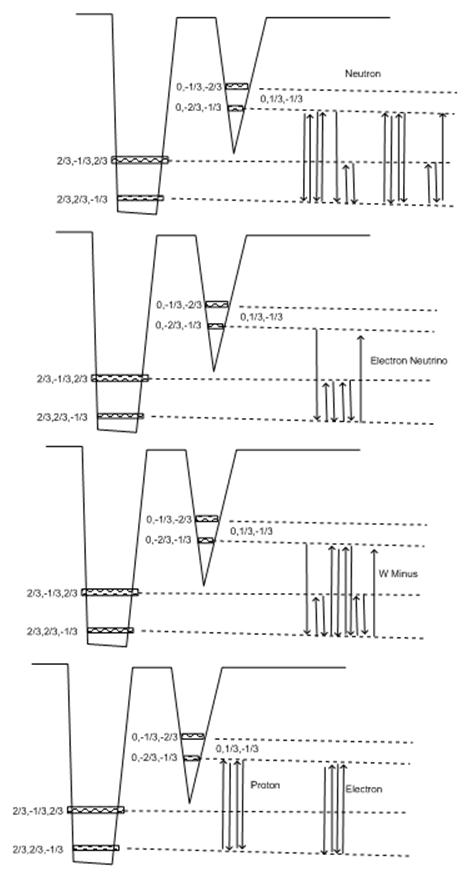 Heisenberg in 1932 stated that Protons and Neutrons were just degenerated states of the same "nuclear" potential or Gauge field. Of course, this hypothesis failed to meet the requirement of being geometric. It introduces willy-nilly another gauge field…:) and doesn't make a simple model for charge. In my case, charge is just the relative phase of dilation of the dilator's coherence. Notice that the Proton and the Electron differs only by the phase of the initial state. The electron starts on the top state (electron state) and the proton starts from the bottom state (Proton states). Also notice that the two states associated with each particle is clearly defined. They differ just by orientation, that is, a transition between (2/3,2/3,-1/3) and (2/3,-1/3,2/3) corresponds to a 90 degrees rotation around the X-axis.

Of course, for someone to define a phase one has to define a Universal Clock. How can one have a Universal close and still be consistent with Strict Relativity. Again, look deep into the eyes of Dr. Illuminati and see that the local time tau and the local direction x are free to rotate (local deformation of the Fabric of Space) all the way to 45 degrees. The hyperbolic nature of our local time is due to the choice of equations of motion and how we describe force and mass – non-geometric concepts. In my theory, dynamics is ruled by the Quantum Lagrangian Principle and interaction has no poles…:) thus no infinities, renormalization/regularization etc…

These are dynamic differences despite of the fact that they are represented similarly to energy differences. I had to create this splitting because it takes time to rotate and during that time the dilator continues spinning within the 4D spatial manifold while propagating at the speed of light along the radial direction. Sub-coherences between these states correspond to rotations within the 3D space and change the phase relationship between tunneling and spinning. This shifts which phase will be flush with the 3D lightspeed expanding hypersphere. Only phases overlapping the 3D Universe at the appropriate phases interact or exist. I used "I interact therefore I exist" paradigm.

In the W-Minus coherence, it is clear that the electron coherence is flanked with two electron-proton transmutation notes. Those notes have the effect of rotating the local metric deformation within the 3D hypersurface thus introducing a dephasing between spinning and tunneling. If you are spinning perpendicularly to R and X, after two 3D rotations you would be rotating around R and –X, thus alternating spinning direction at each de Broglie step. This means that the W- would behave as a BOSON, that is, it has zero effective spin.

There is nothing special about being a boson or not. Certainly there isn't anything about carrying a FORCE be it strong or weak. The mismatch in period introduced by the red lines (Proton-Electron transmutation subcoherences) results in the finite neutron lifetime. Different particles have different period mismatches and thus different bandwidths. This mismatch is what induces the local deformation of the fabric of space and thus the exiting speed.

I noticed that D0 failed to keep his editorial prerogative. Rafael mentioned that since he was not convinced with my arguments (limited by my care of not upsetting my judge and by good manners) he would not redirect others to my blog. The fact that he mentioned it to other members of the D0 group is that Batavia, Illinois (Fermilab) has been among my latest readers. They read it before, but I am giving Rafael the benefit and considering that he was able to see beyond the simplicity of my theory the strength of my ideas.

Of course, Quantum Chromodynamics has predictions which are accurate. This only means that it should reduce to my theory if one makes the appropriate assumptions.

One that should be evident from reading the about my Quantum Lagrangian Principle is that the wavefunction present in all quantum mechanics equations corresponds to the metric deformation projected onto the 3D hypersphere. Gauge invariance just means that the Quantum Lagrangian Principle should be independent upon the initial state of the Fabric of Space.

In my theory, the Universe is criss-crossed by a dilaton field with a wavelength equal to the Compton wavelength of a Hydrogen atom (Fundamental Dilator). This very fine grid is not detectable because of the Quantum Lagrangian Principle. It states that at each de Broglie step of the Lighspeed Expanding Universe all particles dilate in phase with the surrounding dilaton field, thus it produces no scattering whatsoever.

Despite of that unsatisfying conclusion, the physical hypothesis (The Quantum Lagrangian Principle) is trivial to understand and from it one can easily reach the no scattering conclusion.

PS- I tried to cover a lot of my theory in this blog as a brief review of the theory for newcoming DZero theorists. Details can be found in the PDF links on the blog margins.

I will later ellaborate on some requests Rafael made which he deemed necessary for my theory to be considered by the academia. One of the requests is to obtain Dirac Action for the electron.

He looked puzzled for sometime. I supposed he realized that that condition is equal to the covariant matter-free Action if one replaces Nabla by a covariant derivative, square the resulting vector and integrate the result through space. Of course, that has to be the case. The Lagrangian Principle estipulates that dilator always dilate in phase with the surrounding dilaton field, thus not interfering with the dilator field. This means that whatever controls the dilaton field also controls the dynamics of the dilators. In fact, reality is slightly more complicated than that but I will leave at this at this time.

Recently, Dudley Herschbach published a paper entitled "Simple and surprisingly accurate approach to the chemical bond obtained from Dimensional Scaling". In this paper, he calculated the bond energy of the ground and many excited states using an specific style of dimensional scaling. In his paper, the effect of using a large-D (dimesionality) for the classical H2 equations of motion is to keep the dihedral angle quantum while reducing all the other parameters into classical variables. This is what one would expect from making the electron dilators to move into the positive interference patterns (Lissajous) on a molecule with cylindrical symmetry.

Of course, these interference patterns become increasingly more complex as one considers more complex molecules. The simple solution is just to use Schrodinger equation given that I already identified the wavefunction with the dilaton field emanating from the electron dilators.