Time Quantization and the Fat Electron

Quantum Time and the Fat Electron

I thought it would be a good time to review the meaning of Time Quantization and its connection to the Fat Electron (Fundamental Dilator).

This is a very deep Blog with profound implications. This is also a Blog about Science and I do Science for fun...:) thus expect an entertaining and educational voyage through the Fourth Dimension....:)

Here I present a pseudo-Time Quantization Ansatz, which means that although time might not be quantized, the final effect for 3D interactions is not unlike Time Quantization...:)

At the end of this Blog you will understand what is 4D-Mass, 3D-Mass and why Time can be Quantized and Continuous at the same time..>:) and of course, the most important:


Why did I use a one atomic mass unit electron in my calculations!!!!

Let's consider that you have a Girlfriend on a Swing - I had to get the Kid out of the Swing for this Gedanken Experiment. It will become clear soon why...:) (in my case, it would be a girlfriend, in your case it might be something else)...:)

She asks for some untimely spanking and you have to comply. Well, that is where Time Quantization comes into play. What is the best way to comply?... Of course, it is when she is standing still, or at the pi multiples of the swing harmonic oscillation...:)

Of course, if there were some Malabarism taking place as the Swing goes to and fro such that she becomes really skinny (flatten like a 2-D Girlfriend)...:) then there might be some more calculations to consider. Let's say that this Flattening occurs with half the frequency of the swing - spin half-, then she will become 3D and spankable only once every four pi multiples...:)


How such paradigm would help us understand Pseudo-Time Quantization?

Let's recapitulate a few things from the past and a few from the future:

• Remember that the model for matter is based upon considering particles as coherences between two stationary states of a 4-D Rotating Deformation Potential Double Well. This means that the master frequency or wavelength is defined not by the mass of the particles but by the "energy gap" between the two states.

• Let’s define the Standard Universe narrowly composed as all the elements, electrons, protons and neutrons. Every particle in this subset of the Universe is X-Particle monomers/ polymers.

• Keeping in mind that a rotating particle or Girlfriend would be spankable or interactable at every 2pi phase shift.

• One would also conclude that if the same Malabarism were occurring for a Proton/Electron, there would be some phases where that Proton/Electron might become really skinny…


An exception would be a real zero spin particle. It will be interactable every pi phase shift. There are no zero spin hadrons among the components of the Standard Universe, so we will not discuss this kind of particles at this phase.

In the Standard Universe, spin zero matter is created out of linear combinations of spin half dilator - the one and only Electron-Proton Dilator or X Particle.

Electron says about the Fat Proton: He ain't Fat, He is my Brother...:)

First let review some data from the Future…:)

One needs to understand Neutron decay to have some representation of the Electron and Proton 4-D Deformational States.

My interpretation of the Neutron decay process is given below:

This assignment was done considering the lowest volumes or lowest numbers ONE can use for representing the nuclear reaction (Neutron Decay).

This is clearly unorthodox, since the electron is not supposed to have a Quark composition. This is a first glimpse Hypergeometrical Universe Standard Model, which of course, is a very simple model.

Depending upon the response (if any) to this Blog, I will explain the Universe further...:) You people are known for being shy...:)

By this time, after reading the Girlfriend on a Swing Paradigm and all the information I gave you, you should be able to predict the 4-DMass, and 3-DMass for a few particles. Let's start with the easy ones: Proton and Electron.


What is the 3D-Mass and 4-DMass of the Electron shown below? 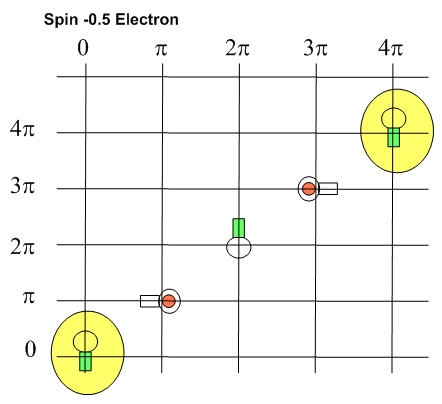 The green rectangle indicates that the coherence is on the Electron side (0,-2/3,-1/3)

Notice that I don't mention the residual length of the four coordinate for simplicity, but it is certainly smaller than the others, thus the skinny profile..:)

I will give the answers…:) 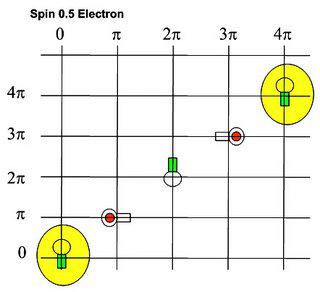 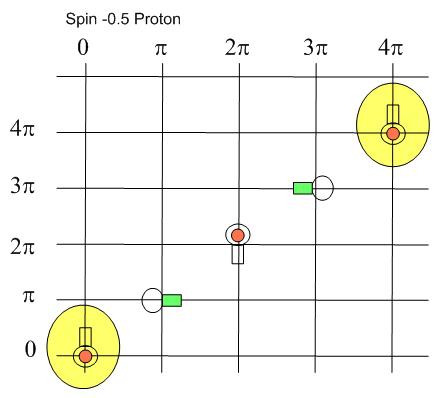 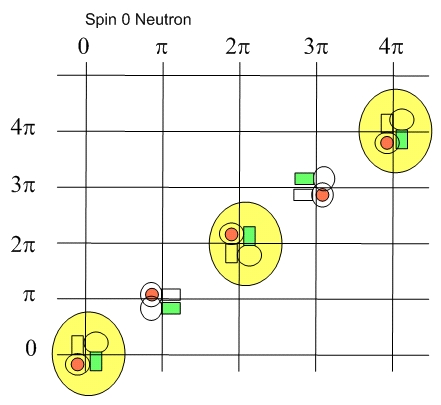 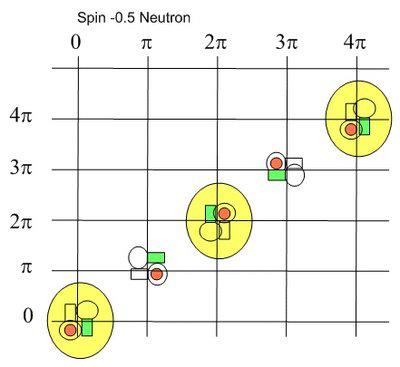 As you can see, if you add a Spin -0.5 Proton to a Spin +0.5 Electron you get a Spin 0 Neutron, which subsequently decays and emits a Neutrino. Other Nuclear Chemistry reactions are similar. The point to be made is about the Neutrino and its nature. It is clear from the two Neutrons States that the Neutrino interacts with the X-Particles while they are laying down..:) It is also clear that the Neutrino carries the energy associated with the two states shown at phase pi. Not unlike an electromagnetic wave, the Neutrino will make the Neutron make an X Particle Dimmer transition. Since the energy gap between those two states is smaller, the Neutrino will not interact with the X Particles during the Cosmological Coherence.

Just to clarify some really complex thinking that I did. To reach the conclusion that the 4DMass of a X-Particle (Electron or Proton) is one atomic mass unit, I had to consider what would be the 3D perceived Mass (4DVolume) at the 3D Time Quantized Phases. I considered that lying down or not the Proton or Electron in 4D would be as massive as the Standing Up 3D perceived Proton or Electron.

Of course, even though the 4DMass of the Electron is one atomic mass unit, the Lagrangian Principle should be applied at the end of the cycle or at 4pi multiples, thus the 2 lambda.

I also created a Blog for the Gyromagnetic Ratio of the Electron and how it is represented in my theory. It will be presented next.

Now you can go back to the Meaning of Material Existence and understand better what I wrote there.

For the people who didn't realize it, I proposed a solution to the Action at Distance Paradox in the Blog "God's Amazing Magic Parlor Trick", which is an irony to a high degree, since this paradox has been used to provide support for crappy "Science" mixing together Consciousness and Reality...:) It was the most obscure intrusion of the observation process on reality. The paradox was a direct attack to Rationality and was in line with the Inflation Theory in my peeve Brain Damaging Offenses...:) In fact my solution is in collision with Inflation Theory for the simple reason that I had to get ride of Electromagnetic Vacuum States., which are necessary for any Adiabatic Radiation Cooling to take place within the scope of the whole Universe. Inflation Theory from I can guess, uses these states and their scaling with the "size" of the Universe to explain cooling... Forgive me if I am guessing incorrectly. I've just cannot read something the proposes breaking all the rules of Physics even for a second...:) Call me a purist...:)

The solution to the paradox was easily achieved by the Gedanken experiment where I placed two eyeballs on the excited state molecule. Each eyeball would look in the direction of the polarizers and see both detectors. I simply proposed that Black Body Radiation from the detectors were responsible for the dephasing of the Coherence at the emitter, thus creating photons with well defined polarization at the emission instant. This eliminates the need for infinite communication speed, traveling back in time, etc...

I have no doubt it is correct. Let me know your thoughts...:)