Why do things move?

Why do things move?

Mostly likely you never asked yourself this question? In fact this is actually two questions:

The answer to the first question is due to the fact that constraint forces do no do any work. They are perpendicular to motion and thus cannot do work even if they wanted..:) They are not lazy...:)

The theories before mine were bult on the base of Classical Mechanics and use Lagrangians and minimization principles. Those principles have built-in concepts of Potentials, momentum, mass etc... Using them one could not create my theory. The reason being is that one has to go one step below. One has to use the reasoning of lazy constraining forces not doing any work and avoid introducing the concept of force.

Instead of thinking about Force, I thought about de Broglie (or Compton if you so prefer) stepwise hyperspherical expansion of the 4-Dimensional Universe Shock Wave. Minimization of the contraint forces means in this perspective having the dilators to be in phase with surrounding dilations caused by other dilators. Notice that this means that all dilators are in phase with each other dilations at each swing of the Pendulum of Bhrama or de Broglie step.

This in synch stepwise motion is the source of Quantum Mechanics and allows for the addition of wave amplitudes as opposed to their squares. I call this a Cosmological Coherence. It is the reason why radiation (spacetime dilatons) generated from each and every atom of your body to add up to form an extensive property, that is, the field amplitude is proportional to the number of dilators.

This simplifies the theory and makes it a simple theory of everything.

Now returning to the problem of why things move (inertially). Inertia can be thougth as the resistence spacetime generates when subject to deformation. The space has a spring constant (which I used to calculate the natural frequency of spacetime waves or gravitational waves and the number is 42!!!!)..... Just kidding...but it is not that far from 42...:) 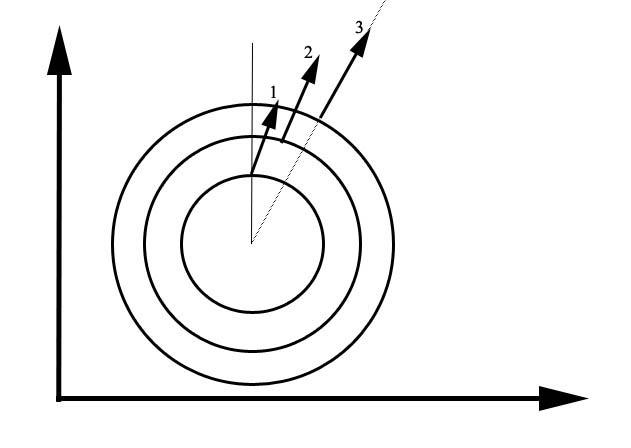 Thinking along those lines, a body that is traveling has all its dilators siting on a shock wave that has a local distortion. This figure shows that local deformation of the spacetime as arrow 1, which is not perpendicular to the hyperspherical shell any longer. Motion happens as the hyperspherical Universe expands. Notice that moving from the situation 1 to the situation 3 resulted in the elimination of spacetime stress. The k-vector on situation 3 is perpendicular to the hyperspherical shell and will move away from the original point with the same velocity as always, its Hubble velocity...:) albeit remained fixed onto the Fabric of Space...:)

That space distortion will travel to the point in the Universe where the distortion is relaxed. When it reaches that point it will stop and site onto the relaxed Fabric of Space. Surprisingly, due to the expansional character of the Shock Wave Universe, it will be seem as moving at constant speed (its local Hubble speed) forever.

This is the reason for motion and this is the logical complement to Newton's First Law!

Next, I will explain why things move when subjected to a "Force".